LONDON (ICIS)–Turkey and Ukraine are emerging as possible transit routes for Russian gas to eastern Europe from 1 January 2020.

But with less than a month until new transit arrangements are expected to come in place, it is still uncertain whether the gas will flow north to south, or whether it will be shipped from Turkey to northern off-takers.

On the one hand, Turkey and Russia announced last week that the TurkStream corridor across the Black Sea would be commissioned at the beginning of next month.

Once operational, TurkStream 1 and 2 which have a combined capacity of 31.5 billion cubic metre (bcm)/year capacity would divert volumes currently shipped through the Trans-Balkan pipeline across Ukraine to Turkey and further to the Balkan region and central Europe.

Yet, even if completed on time for 8 January, the two pipelines may still require a ramp-up period until they reach full capacities of 15.75bcm/year each.

On the other hand, Ukraine, the historical transit corridor to Europe and Turkey, is negotiating with Russia a new long-term contract from 1 January 2020. There were indications last week that the two parties may reach common ground.

Nevertheless, there are still uncertainties, not least related to border capacities which will have to be thrashed out at upcoming talks.

The outcome of the negotiations will determine whether the gas will continue to flow across the Trans-Balkan pipeline via Ukraine, the Republic of Moldova, Romania, Bulgaria, Turkey, Greece and the Republic of North Macedonia, or whether the direction will be reversed.

Depending on a decision on the actual flow of gas from 2020, regional transmission system operators will also be able to finalise the entry-exit capacities that they would make available from January ’20 ahead of monthly auctions scheduled on the regional RBP platform for Monday, 16 December.

As required under EU rules, TSOs of member states have already published long-term entry-exit capacities at border points, but these may have to be adjusted once there is more clarity regarding the actual transit from 1 January 2020.

ICIS has examined the available entry-exit capacities along the Trans-Balkan pipeline and explains the scenarios that are shaping up.

1. What happens to the Trans-Balkan pipeline from 1 January 2020?

The pipeline may continue to remain the north-south transit route for Russian gas to Turkey and southern Europe, but it is equally possible that transit to the region would stop entirely on 1 January until Putin’s arrival in Istanbul for the 8 January TurkStream launch. 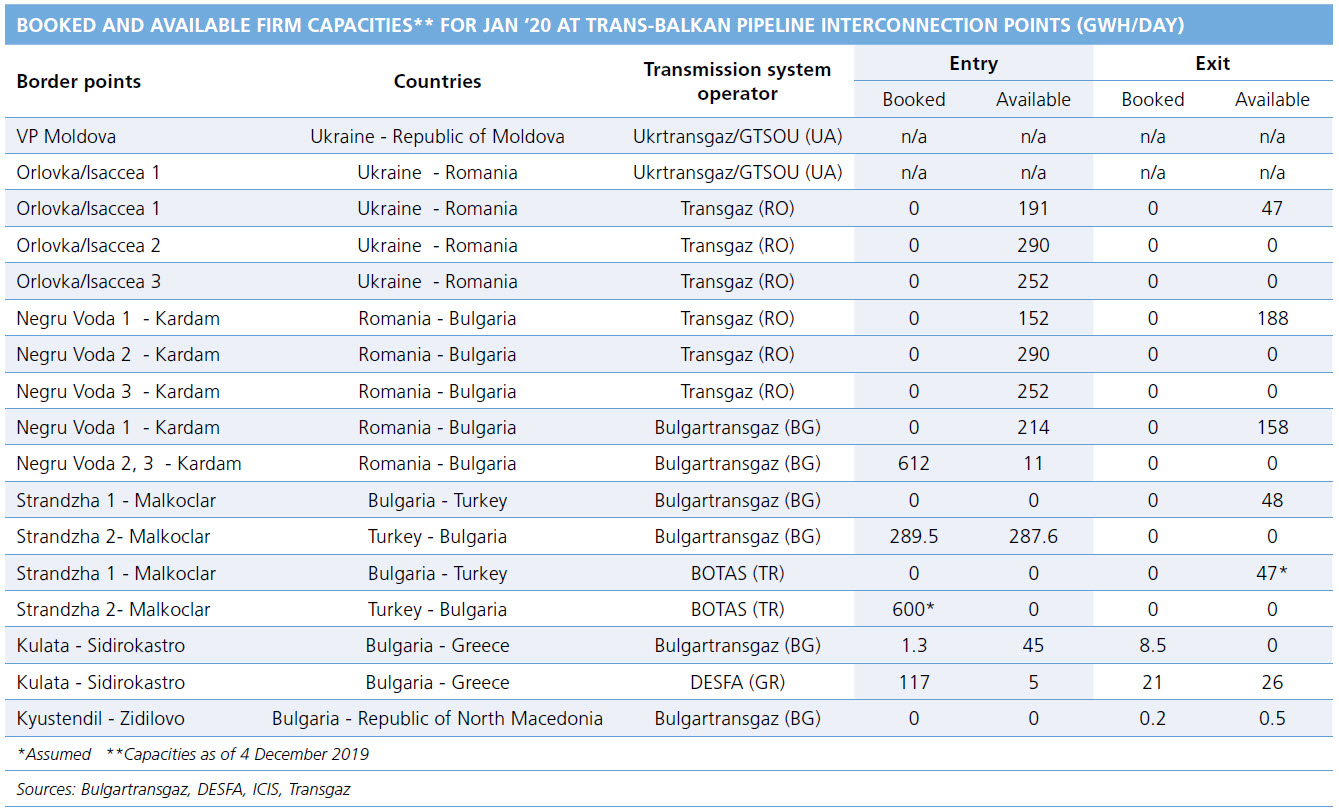 The curtailment would strengthen Russia’s position and rally support for the TurkStream corridor as a key supply route to the region.

If, on the other hand, Ukraine and Russia agree on a transit deal, the Trans-Balkan pipeline, which reaches a yearly capacity of nearly 30bcm on the Ukrainian-Romanian border would continue to supply gas north to south. The pipeline can also operate in reverse thanks to recent upgrade works.

In a status quo scenario, the gas would continue to flow from Ukraine to southeast Europe and Turkey, but capacities would have to be booked in line with the existing ENTSOG calendar and the EU network codes.

Some sections of the pipeline would still be covered by long-term legacy contracts which expire within the upcoming decade. These include Bulgaria’s own transit contract with Russia’s Gazprom which expires in 2030 and another transit contract held by Romania’s Transgaz which ends in 2023.

In a scaled-backed scenario where Ukraine manages to secure only an agreement for reduced transit, the country would be shipping volumes to neighbouring Moldova, while the rest of the region would be sourcing the gas from TurkStream 2 and the southern sections of the Trans-Balkan pipeline.

In a no transit scenario, the gas would be sourced from TurkStream and shipped in reverse flow to Bulgaria, Romania and Ukraine from where the Ukrainian gas grid operator would be delivering it into the Republic of Moldova.

Turkey and Russia say the two TurkStream pipelines have already been filled in anticipation of commissioning next month, although their actual delivery points are yet to be confirmed.

Initial plans suggested that the landing point for TurkStream 1 which will exclusively supply the Turkish market would be at Kiyikoy in the northwest Thrace region. TurkStream 2 which will have the same landing point will link up with an onshore pipeline across Thrace up to the Bulgarian border. The exit point will be Strandja 2 and will link up with the existing section of the Trans-Balkan pipeline in Bulgaria.

This means there will be two border points on the Turkish-Bulgarian border.

One is the existing Strandja 1 – Malkoclar, which has been historically used for Russian imports into Turkey. If Russian gas exports are diverted to TurkStream, Turkey will no longer receive Russian gas via this entry point. Strandja 1 – Malkoclar will be scaled down and used only for smaller imports from the Bulgarian virtual trading point (VTP). The expected import capacity will be approximately 53GWh/day. The Turkish regulator EPDK is expected to announce quarterly and monthly import capacities for this point after 17 December. Auctions for capacity at the Strandja 1 – Malkoclar point will be organised in Turkey. The entry capacity will be available for third party access.

Meanwhile, the new Strandja 2 – Malkoclar exit point will be used exclusively for the export of Russian gas from Turkey to Bulgaria and the region. The exit capacity is expected to be close to 600GWh/day/year. The capacity may have been entirely booked by Gazprom on the Turkish side of the border. On the Bulgarian side, a total of 290GWh/day were already allocated as part of an open season which concluded earlier in 2019. Another 288GWh/day are available for booking from 1 January 2020. The first monthly capacity auction for this exit point will be held on the regional RBP platform on 16 December 2019.

TurkStream 2 is designed to bring 15.75bcm/year to the Balkans and central Europe, using existing sections of the Trans-Balkan pipeline in Bulgaria as well as a new 474km line that would link up the domestic infrastructure with the Bulgarian-Serbian border. This pipeline is currently delayed and may not be commissioned until the end of next year.

3. What does each country want?

For Ukraine it is critical to secure a long-term transit contract for large volumes to central, southern Europe and Turkey. It also wants to sign an interconnection agreement with Romania for bidirectional daily capacities of at least 130GWh/day and continue supplies to the Moldovan market.

The Ukrainian gas grid operator insists on implementing EU rules for all interconnection points including those with central European countries, Russia, Belarus and Moldova. If it were to make any exception, it would create a precedent that would entitle other neighbouring countries to seek similar exemptions.

If it fails to secure a long-term transit agreement for the Trans-Balkan pipeline, it may have to import gas in reverse flow from TurkStream via Romania to supply its southern Odessa region.

The country says it has secured a 3bcm/year Russian contract for delivery between 2020-2022, but it is still uncertain whether the gas would be supplied via Ukraine or in reverse flow from TurkStream via Romania.

If the latter, the gas would be delivered at the Isaccea1-Orlovka interconnection point with Ukraine, from where the Ukrainian gas grid operator would be reportedly supplying it to a new Moldovan virtual point which would merge existing physical points.

As a contracting member of the Energy Community, the country has already transposed the EU’s network codes in its legislation even ahead of a final February 2020 deadline. However, the implementation may be complicated because the transmission system operator is partially owned by Gazprom, which may be reluctant to implement EU rules.

Romania will remain a transit route in both scenarios, although if Ukraine loses its long-term transit via the Trans-Balkan pipeline, its role would be diminished. If Moldova and Ukraine secure the gas via TurkStream, Romania would transit the gas from Bulgaria to Ukraine along one of three strings of the Trans-Balkan pipeline. The Romanian TSO has allocated 46GWh/day for capacities at Bulgarian and Ukrainian borders, but the Ukrainian gas grid operator is expected to challenge Transgaz, pushing it to triple it. Irrespective of whether the capacities at both ends – Negru Voda 1–Kardam and Orolovka-Isaccea 1 – increase or not, the two capacities would not be offered separately in the immediate future.

If the direction of the transit is south to north, Romania would not be able to off-take gas for its needs from the Trans-Balkan line. It would have to secure volumes from Ukraine via the Mediesul Aurit-Tekovo interconnection point, some 700km northwest from the Isaccea-Orlovka interconnection point.

The Balkan country has a long-term transit agreement with Gazprom until 2030 and has been shipping Russian gas to Turkey, Greece and the Republic of Macedonia along the Trans-Balkan pipeline. However, if supplies are diverted to TurkStream 1 and 2, it will no longer transit gas to Turkey, but it will have to off-take volumes from TurkStream 2 via the Strandja 2 – Malkoclar interconnection point for its own needs as well as for onward supplies to Greece and the Republic of North Macedonia.

Under this scenario, it is expected to ship gas to Romania via the Negru Voda 1 – Kardam interconnection point where capacities will be made available for third party access.

It will also transit gas to Greece and the Republic of North Macedonia under the terms of its existing 2030 agreement with Gazprom.

Capacity at the Kulata-Sidirokastro border point between Bulgaria and Greece is partially booked by Gazprom which has long-term supply agreements with three companies in Greece until 2027. However, there is capacity available for third party access from Bulgaria to Greece as well as in opposite direction. The available capacity is booked in line with EU rules and the ENTSOG calendar.

The country has a supply contract with Gazprom for 0.7bcm/year but has been off-taking less than 0.3bcm annually in recent years.

This means there is sufficient available capacity on the border point with Bulgaria, but had been underused because of lack of alternative gas supplies in Bulgaria.

As a contracting member of the Energy Community, the country has committed to implement the EU’s network codes including those on tariffs and congestion management (CAM) by February 2020.

However, since it is not an EU member, there is no obligation for Bulgaria or for the Republic of North Macedonia to implement the rules. Bulgaria signed a document in 2017 whereby it said it would be willing to implement EU regulations on this border. It is still uncertain whether it may do so from next year.

If supplies are diverted from the Trans-Balkan line to TurkStream, Turkey will become the main supply route for Russian gas to the region. However, Turkey itself will have little control over the supplies since the exit border capacity into Bulgaria belongs to Gazprom.

This capacity would not be booked under EU rules, since Turkey is neither an EU state, nor a contracting party of the Energy Community.

Nevertheless, Turkey may have a say in negotiations with Russia over supplies via TurkStream 1, which will exclusively feed the domestic market. Multiple sources interviewed by ICIS said the state company BOTAS may not be looking to renew a long-term agreement with Gazprom once it expires in 2021. There are also uncertainties regarding the supply of gas to independent importers, who are now struggling to pay take-or-pay penalties for failing to off-take gas this year. They are also expected to pay $1bn to Gazprom following an arbitration award last year. This means that it is yet uncertain who exactly in Turkey will be off-taking the 15.75bcm/year of Russian gas from TurkStream 1.