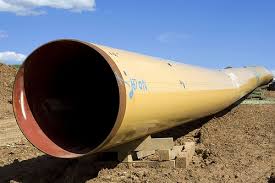 In 1967, Romania began to import crude oil from Russia. All that time and then start designing transport crude oil pipeline execution-Pitești.

The pipeline was designed to carry crude oil from 3.5 million tonnes imported, was chosen as the 377 mm diameter and wall thickness of 12 mm. If the route chosen for the installation thereof there were no stability problems or other obstacles, croasing  of the Danube River and Borcea at the time represent a challenge in terms of both design (being the largest pipeline transportation of crude oil from Romania), mostly as a running (and there is no possibility of croasing river through drilling conducted).

After studying the batimetry of the river (by measurement with manual drilling) and especially after measuring the speed of the River, it has been noted that the mounting of a 370 mm diameter pipeline was not possible (due to its buoyancy).

It has been selected as the solution, installation of four pipelines 373 mm with wall thickness of 12 mm. The standard chosen for the implementation of the pipeline was GOSM 8731-58, and its isolation was achieved with insulation type bitumen coated with PVC foil. For the maintenance of the pipeline on the bottom of the river Danube, in the area where there was forest were fitted to the floodplains of 50 m in 50 m of concrete rings (blocks), and in the șenalului area were navigable wrapped pipes in a concrete shell. The work was entrusted to the power plant siting, pipeline project being carried out by The main pipelines design.

For Assembly elected a revolutionary technology at that time, consisting of:

a. dredging the bottom of the river Danube and Borcea,  for mounting pipe (making a trench on the bottom),

b. making a launch ramps pipe consisting of a narrow railway in length and equipped with 500 ml vagoneți download from coal mines,

d. pipe installation in continuous thread and tow them by a barge, perpendicular to the river.

There were two pipes mounted in an aisle between them being mounted stone groynes and deposit the sand on them. After 50 years of activity and 3 Interior inspections, carried out after the year 2000, showed that in the absence of any preventive maintenance (no cathodic protection), they show a small external corrosion of a maximum of 40% of the wall thickness.

In 1979 were still installed 6 oil pipeline whith 373 mm threads which are currently used only 50% (3 being shut down due to corrosive processes over 80% of the wall thickness).

I have reviewed this history thanks to the professionalism of Brașov pipes manufacturers, those who have chosen the most innovative technique (i.e. immersion pipe by filling with water, progressive floating).

Considering that the time of erection was lower than that of the gas pipeline installation underneath the Danube since 2016, this shows that we must learn from our inaintașii to that professionalism in the design and installation of pipelines and gas transport lines must be retained and must be promoted.

But no other State companies operating lines systems over the past 20 years there have been many changes in the operative management, each bringing and amendment of investment strategy.