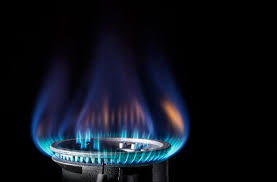 In an entirely surprising manner, the GEO on the establishment of certain measures in the field of public investments and fiscal-budgetary measures, the amendment and supplementation of certain legal acts and the extension of certain terms introduces the return to the obligation for all consumers to consume domestic-imported gas, according to a percentage established by ANRE. This practice had important consequences on the gas market, which we will analyze next.

Starting with 2001 the principle of domestic consumption – import fairness was introduced in the Romanian gas market for all gas consumers. The procedure involved the submission to the market operator within TRANSGAZ, by all consumers and distribution operators/suppliers on the regulated market of consumption forecasts for the following month, the submission by gas producers of the maximum available gas quantities that could be extracted from domestic production, and the Market Operator calculated by difference the necessary gas quantity to be imported for the following month, so basically it determined the import gas percentage mandatory to be purchased by all consumers for the following month. This percentage calculated by the Market Operator was subject to ANRE approval and became mandatory for all gas consumers in the following month.

It can be seen that between the percentage calculated by the Market Operator and the market percentage endorsed by ANRE there are differences, which have not been explained by ANRE in the published reports, but which determine economic benefits for some companies (the large industrial gas consumers) and economic disadvantages for other companies (gas producers). As a result of the difference between the calculation of the Market Operator and that endorsed by ANRE, the real market price was influenced; indicatively, the variation of the average market price through the approval by ANRE of a certain percentage, other than that calculated by the Market Operator, determined the following changes in the average market price:

“-” means the administrative decrease in the average market price through the percentage approved by ANRE, different than that calculated by the Market Operator

“+” means the administrative increase in the average market price through the percentage approved by ANRE, different than that calculated by the Market Operator

Changing the percentage calculated by the Market Operator by ANRE determines the following consequences:

The following chart presents the monthly domestic production – import percentages during 2007-2012, as well as the “normal” percentage of imported gas necessary to ensure gas for end-consumers and the operation of transmission-distribution-storage systems in normal conditions. 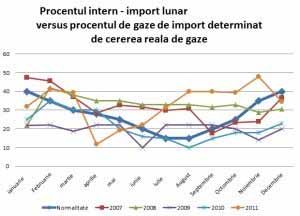 ANRE did not understand the theory taught at the first course of economics: “Even the most monopolistic economy has failed to control both price and quantity”, only by manipulating the results – we might add.

The consequence of such approach:

Fairness of domestic-import gas consumption for all consumers is a good principle, which must continue in Romania, but through mechanisms ensuring:

Gas exporters treat each national market particularly, placing the offer, including through intermediaries, which maximize their interest in the respective market. Thus, an exporter that has relations with a company activating on several markets takes full advantage of opportunities it offers in each market and will conclude contracts for each market with separate clauses and prices. 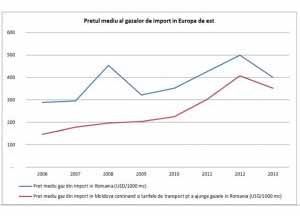 I believe that this aspect was mainly due to:

Making a correlation between the average domestic gas price and the import gas price we can notice that the increase in the domestic gas prices led to a decrease in import gas prices, respectively the import gas price adapted to the affordability of Romanian consumers. Summer gas, discounts of gas exporters on the Romanian market, new price formulas were the measures by which they reacted and adapted the offer for imported gas to the new changes in the Romanian market, respectively to the increase in domestic gas prices and the decline in gas demand. The gas basket, thought as a measure to ensure fairness in the market in 2000, turned after 2004 into a tool for keeping a low price for the end-consumer, contributed, together with the termination of the convention between Romania and Russia, to gas imports in Romania at superior prices and the additional payment by Romanians of approximately USD 1.6-3bn in 10 years, respectively the payment by 15-25% more for the imported gas.

It can be noted that over time the gas basket has varied greatly, even during the same month, which apparently is difficult to understand because the demand at the level of the same month cannot show significant variations, from 100% to 300%, except in some special situations caused by market manipulation. These variations were also due to the influence of large industrial consumers which in fact made the game on the Romanian gas market, decreasing or increasing gas prices for the other consumers through their behavior on the market, game which was legalized by ANRE through specific decisions and orders. To exemplify how these differences in the basket occurred within the same calendar month, we will present an example:

Gas demand was established at the beginning of a calendar month based on statements of industrial consumers and distribution operators. We consider that it was: 700 mcm/month.

The monthly available quantity from domestic production for the same month was: 500mcm; at an average price of RON 45.71/MWh (RON 0.47/cu m)

This percentage had to be purchased by all market customers, the average price on the market thus being: RON 45.71/MWh * 71.5% domestically produced gas + RON 150/MWh * 28.5% imported gas = RON 75.3/MWh. ANRE established quarterly, based on this principle, the unitary cost of gas, i.e. the regulated price for end-consumers.

The industrial consumer X that has stated that it would consume monthly 100mcm consumers by 100mcm more.

Consumption at the end of the month was 800mcm instead of 700mcm the base demand based on which the average price was determined.

Sources from domestic production were still 500mcm (this being the maximum available amount), thus resulting that the difference was covered with import sources: 300mcm (the initial 200mcm + the subsequent 100mcm), resulting that the real import percentage was not 28.5%, but 37.5% of imported gas.

Thus, there was a difference between the price established by ANRE and the unitary cost of gas, which for our example was lower by RON 9.3/MWh (RON 0.097/cu m or around RON 140-291/building/year), meaning that the costs were higher by 12.4% than the price established by ANRE. In fact, in all these years, consumers, including household consumers, took money out of their own pockets to subsidize the consumption of special industrial consumers (for our example RON 9.3 for each MWh consumed). These costs were classified by ANRE as deferred costs, and ANRE management started on 15 September 2012 an action to recover them, by increasing the price at the end household customer in 2012, following to apply new price increases so that by 2014 the claimed EUR 500,000,000 could be recovered – respectively to increase by RON 8.1/MWh consumed in the following years (RON 0.085/cu m, i.e. paying in the following 2 years around RON 255-510/building/year in addition). In other words, after during 2005-2010 consumers had paid in addition RON 9.3 for each MWh consumed to put it in the pockets of special industrial consumers, it was time to pay other RON 8.1/MWh for two years (2012-2014) to put them in the pockets of certain distribution operators.